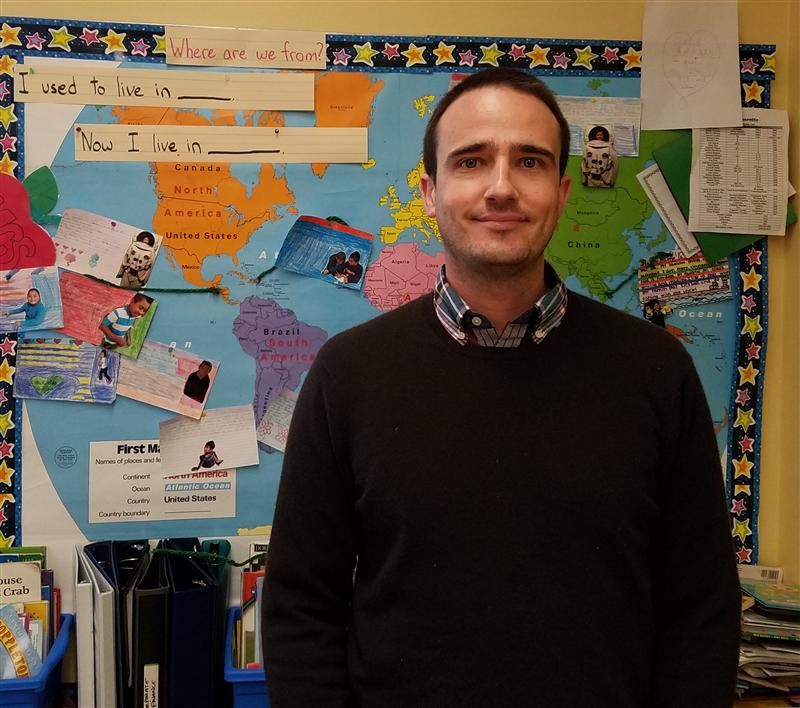 When Corey Wallace tells his morning class that the words of the day will be some, come and make, the young newcomer students burst into song and he can’t help but sing along.

They sound the same at the ending”

While Room 8 at Manzanita Community School (MCS) looks like an ordinary elementary school classroom - filled with books, brightly-colored posters and groups of small tables and chairs - it functions more like a mini United Nations.

Corey, in his second year teaching at MCS, is one of five newcomer elementary school teachers in OUSD. He’s charged with teaching recently arrived students from all around the world in classes that are mixed by grade, language spoken at home and country of origin.

His first class of the day is comprised of three Yemeni girls, one Afghani girl, a Nepalese boy and a boy from Guatemala, all but one of whom were unfamiliar with the roman alphabet before arriving at MCS.

“We work on sight words and letter sounds to help them build confidence with the language” says Corey. After the song, and practicing pronunciation, Corey has the students practice writing the following sentence to build on their work together: Some children will come out to make a snowman. All six students proudly present their work and delight in Corey’s praise. 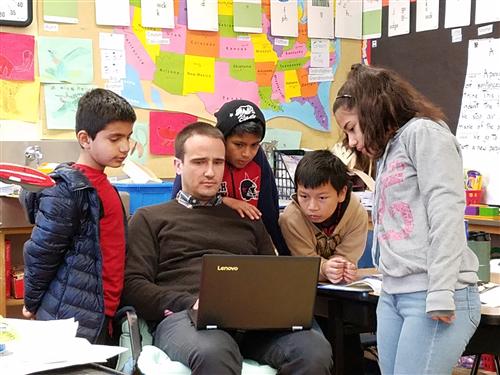 Originally from Redding, California, Corey graduated from UC Davis and spent two years working as an ESL teacher in Korea. After arriving in Oakland, he worked at ICS Elementary School as a reading intervention specialist before getting the call about MCS.

“The newcomer teaching position at the elementary level didn’t even exist a few years ago,” Corey said. “But I know that newcomer students struggle and need support and it seemed like the right fit. I liked the school culture of MCS and the staff.”

In Wallace’s second class of the day, he works with 4 students who have been in the country for more than a year. This is Corey’s most advanced group and together they focus on reading, writing and conversation. Zubar, a 5th grader from Afghanistan enjoys the classroom reading and his favorite thing about MCS is that “they have such good teachers.” The goal for these students is to increase their ability to use academic language and produce writing at grade level.

Part of Corey’s teaching philosophy is rooted in the importance of family involvement. He visits the homes of his students several times a year to share a meal and get to know the parents. “Meeting with families outside of school isn’t something that’s required, but it’s really powerful so I choose to do it,” he said. Fortunately, all of his current students have strong, supportive families at home.

When conversation turns to the current political climate, Corey becomes quiet. “I don’t know what to say,” he sighs. “It’s so sad”.

“I work directly with 10 Muslim students, and indirectly with five more. I eat at their homes. I talk with their Dads. These are nice people; conservative but accepting. We should want more of these people in our country, not fewer.”

As the bell rings signaling the arrival of Corey’s next group of newcomer students, his current class packs their bags and says goodbye, looking forward to their next class.

“That’s what so great about these students,” he says. “They’re so eager to learn.”