The sounds of hand tools chiseling, sanding and rasping have filled the Montera Middle School woodshop since 1960, the year it opened. The familiar sounds and much of the original tools remain today, teacher Eric Runge remembers a time when woodworking was standard learning in all middle schools.

Now, Runge runs the only woodshop classes in OUSD, and he’s proud to keeping building a program that he first joined as a student at Montera years ago.

“The kids are making the same projects that I did, but they have to be more imaginative”  Eric said, pulling out examples of his own wooden spoons and bowl from the storage cabinet. “I think woodworking has to see a resurgence...I think there are a whole lot of people who want to bring back skills that can turn into high-paying jobs that don’t require a college degree."

As the students in his sixth period advanced class stream in, they go straight to work on their individual projects, each with their own block of mahogany wood to craft.

Eric’s lifelong love for the woodshop and hands-on learning is clear.

“This is the place where kids get exposed to a skill they never had that can become a lifetime passion or become a career,” Eric said. “This is where they learn to use their hands and very precise tools that can lead to high-paying jobs. They learn that math has a purpose, it’s real-life experience that they don’t get in other classes.” 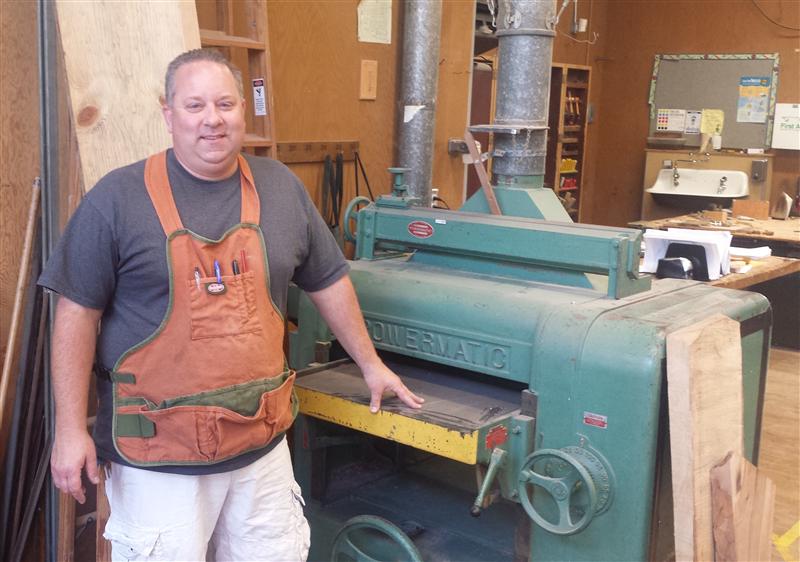 While the shop is fully functioning, Eric says it will take a lot of support from the community to get the woodshop back to its former glory. His motivation is to not just get tools that meet modern safety standards but create the opportunity for students to work on meaningful projects with a high level of craftsmanship. He believes there is a lot of potential to even sell items that students make such as cutting boards or adirondack chairs in order to generate income.

To meet this goal, he launched a GoFundMe campaign to raise money for a SawStop table saw with an automatic blade guard and clamps among other supplies needed. In just one month he has raised over 14k of his 30k goal, thanks in large part to donations from former Montera woodshop students like himself. “In my fantasy world we also get a laser cutter,” Eric said. “That would open up a whole new world to students.”

Hans, an 8th grader, took a break from sanding his bowl to explain his process, and how Eric is supporting his learning.

“My friend came up with the idea of making fishes so I drew a simple design of a circle with the fin with the bowl part in the middle. Then you measure how deep the wood is and carve until you think you’re low enough,” he said. “I’m pretty sure I was just above 1.5 inches deep and this is a two-inch board. We’re using a gouge, a mallet and a bench dog which we use with the vice to hold it together.”

Photo: Woodworking students, Hans and friends with their fish-shaped bowls alongside the circular bowl Mr. Runge made in his middle school days.

Hans added, “I usually think of this class as my connection class because you get to talk to your friends, You can be sanding and talking to your friend at the same time.”

Photo: Advanced woodshop students at the only remaining middle school woodshop in Oakland.