Academics First, then Athletics
McClymonds Football Coach Mike Peters
Afternoon football practice at McClymonds High School has begun, but you would have no idea if you looked out at the empty football field. The action is all happening upstairs in three third-story classrooms. That’s where practice always starts for the Mack players, with a focus on the ultimate goal: getting into college. 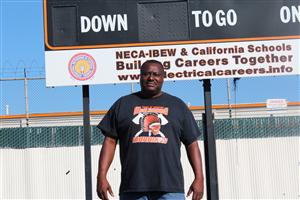 McClymonds head coach Mike Peters is there leading the way, bouncing between classrooms to check on students working with tutors or meeting with a college advisor. Each student-athlete is supplied with an academic playbook that charts their coursework throughout high school, so coaches and tutors can make sure they are not only maintaining eligibility standards but also staying on track to graduate and go on to college.

“As a coach, one thing we always hear is, ‘we only care about the sports,’” Mike says. “But if you don’t have the academic piece, there are no sports. You have to maintain a 2.0 (grade-point average) but we’re actually a little higher than that through our program, because with a 2.0 I still can’t get you into college. So we aim for a 3.5 or better, so (a student) won’t get denied at any school.”

The results back up the program. Mike has been coaching at McClymonds since 1992, and for the past decade has run the academic program as a part of practice. Mike says that for the past three years, the football team has maintained a 99 percent graduation rate. Last year, five players earned Division I college scholarships, the highest level of collegiate sports. As the 2015 football season kicks off, McClymonds remains the league favorite and carries a five-year league winning streak.

Mike credits a close, family-like atmosphere with the team for its success. Many of the coaches are graduates, and current NFL players and OAL grads Marshawn Lynch, Josh Johnson and Peters’ own son, Marcus, a rookie with the Kansas City Chiefs, visit with the team when they’re in town. Every January, the McClymonds football team hosts a “college symposium” where students currently in college share their experience with the current team.

“Kids get to ask questions, about how college is different than high school,” Mike says. “It’s the Mack Family, everyone wants to come back and give back.”

After an hour of study hall, the student-athletes file out of the classrooms and start heading downstairs to the field. The hard work doesn’t stop.

“On the field, off the field, we do the same,” Mike says. “We don’t practice until 5 pm because we have lights and it’s more important for the kids to be eligible, and to get to the next level.”

Click here to read a preview of the OAL football season in the Oakland Tribune.
Copyright © 2002-2020 Blackboard, Inc. All rights reserved.