We are Gladiators; therefore, what we do in life echoes in eternity… 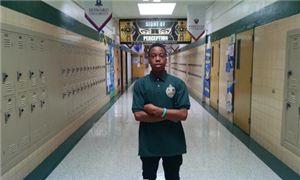 “He’s a character,” says Frick Impact Academy Resource Teacher Denise Collins about 13 year-oldTaye’Shaun Campbell. The eighth grader seems to know everyone on the Frick campus where classmates and teachers greet him as he walks by. “I’m a goofy dude,” he says with a smile. His easy-going nature radiates at school, but not many know this young man has had to overcome some major obstacles in his life.

TC, as everyone calls him, lives with his grandmother because in recent years his mother has been sick and he’s not close with his father. “Mom was like my mom and dad,” he says, adding that he has also relied on one of his sisters when times are tough.

He had always gotten good grades, but TC says things changed on November 7th of last year. That’s when, while playing flag football, he suffered a serious broken leg.  His recovery took him out of school for several months. “It wasn’t easy but it wasn’t hard. I just had to do a lot of work to catch up.”

TC’s teachers say he did a good job recovering academically, despite the setback. Now with his leg healed, TC wants to focus on improving his grades even more. He acknowledges that sometimes he gets into trouble, but that he wants to change and impress his family. “They’ll be proud of me and they’ll see I actually did something with my life.”

TC has big plans. “I want to be the first one in my family to ever go to college,” he says. He also dreams of playing basketball in college and in the NBA. Basketball has been his favorite sport to play and watch ever since his injury. His favorite team is the Golden State Warriors and his favorite players are Stephen Curry, Kevin Durant and Maya Moore of the WNBA’s Minnesota Lynx.

TC admits playing pro basketball like his favorite players is a long shot. That’s why he wants to get a degree in engineering or in law; an impressive plan for a student whose favorite subject is math.