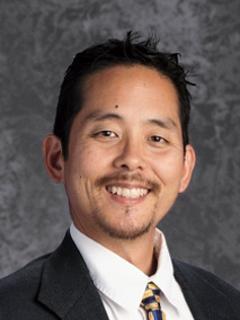 Principal Cliff Hong joined Roosevelt Middle School at the start of the 2010-11 school year. Before that, he worked as an Assistant Principal at Edna Brewer Middle School in the Oakland Unified School District (OUSD).  He is one of longest-serving middle school principals in Oakland.

Cliff taught middle and high school for six years in the South Bronx, Syracuse, and in Oakland. In 2015, he was selected to be one of a handful of Executive Principals in OUSD. He is an ardent advocate for public education, which he sees as being absolutely necessary for a democracy to thrive. Cliff is from Southern California, and currently lives in Oakland with his partner Lindsay and sons, Yuji and Tomu.

Facebook
YouTube
Google Drive
Twitter
Pinterest
Vimeo
Flickr
LinkedIn
Instagram
Nondiscrimination Policy: OUSD prohibits unlawful discrimination against any protected group as identified under Education Code 200 and 220 and Government Code 11135, and Title IX, including actual or perceived sex, sexual orientation, gender, ethnic group identification, race, ancestry, national origin, religion, color, mental or physical disability, age, or on the basis of a person’s association with a person or group with one or more of these actual or perceived characteristics in any District program or activity that received or benefits from state financial assistance, including athletic programs. Complaint forms are available at school sites and at the Office of the Ombudsperson, located at 1000 Broadway, Suite 680, Oakland, California 94607. For further information, call 510-879-4281. BOARD POLICY 0410, 51
Copyright © 2002-2023 Blackboard, Inc. All rights reserved.